No grocery list this week. Or last week, as it were. I’m posting this from the comfort of my couch in Syracuse following a week’s vacation.

We pulled into the driveway around 2:30 p.m. today after a week in Rehoboth Beach, Del. for a week of sweating, eating, drinking and watching children do whatever children do. It was the same house as before, though we are up to five children. The group is a loose assemblage of friends that worked together at the St. Bonaventure University newspaper and its athletic department sports information office, plus their significant others and progeny. This trip started in 2000 as a long weekend in the Adirondacks. Back then, the “classy” dinner was grilled chicken breasts and we consumed handles of vodka without regard for life, limb or, well, anything. We were young, dumb, and broke. Eventually, we grew up, got married, had kids, and changed venues. Our trips became the Outer Banks before turning northward four years ago to The First State.

As usual, I did the lion’s share of the cooking during week, though not that I mind. I actually enjoy cooking for my friends. I’m brought my own knives for the first time, which made a difference, as well as six different spice blends. I’ve already started rewriting the grocery list for 2016, based on what I know and what I think I know about the house we rent and the people with whom we rent it.

I have a substantial amount of writing to do, including a restaurant review, features on two of Delaware’s premiere breweries and interviews with their brewmasters. I also brought home a tremendous amount of beer that needs to be consumed and reviewed. And, to make things fun, I’m having all four of my wisdom teeth out on Friday, the result of negligence and cracking one of them some weeks back.

Until then, enjoy this post that originally ran in June 2011:

On the Road Again 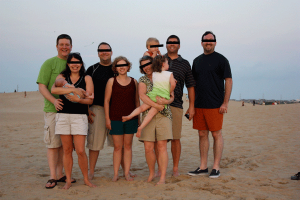 Protecting the innocent from having to admit that they must travel with me.

Only a few truly know the pain. The Wife. Phil. Jeremy. My sister. A couple of co-workers. Of the overall population, we’re talking a percentage stretched out to eight or nine decimals. Yet, for the few people in America that have ever traveled with me, the experience is a recurring nightmare. Like a relapse of a chronic disease, it hits you head on. You grit your teeth for 12 or so hours and, hopefully, it passes.

According to the countdown clock widget on my desktop, there are 29 days and a handful of hours (as of this writing) until I leave the office on vacation. That means 30 days until we leave and 31 until check-in to our house in Nags Head, N.C. And if you think this is mere obsession over a long-overdue vacation, you must be in the camp that believes Congressman Anthony Weiner is going to survive this Twitter thing intact.

I’ll use a GPS, but I already know the route I’m taking (Side note: Like most men, I can go some place once and remember the way. I call it the Sherpa gene.). The genius on my dashboard is simply for detours and road work alerts (TomTom‘s lifetime traffic is 16 different ways of awesome and fairly inexpensive). In the well sticking out of a seam on my dashboard is a list of exits along the way, as well as the mileage in between each stop. I’ve spent the better part of the weekend reading websites and forums where others like me have reported road work, toll increases and other things that the rest of the world would be surprised by.

So, why do I obsess? This week long trip to North Carolina is the rest stop on my annual turnpike. When I return, I’ll be knee deep into the ramp up to Walk To End Alzheimer’s (our fall event). The past year has been as grueling as the past. This is the oasis for the annum. About a dozen of us (the faces and numbers fluctuate yearly) gather each year, lugging our children, laptops and books, for a week at the beach (though we rarely go to the beach; the smell of sea air is enough). It’s a chance to reconnect and tell the same tired stories over and over as if we have never heard them before. These people are my extended family…my Bona family. The men of the group spent hours together at the college newspaper or sports information department. In the process, we developed our own bond and social circle that brings us together each July. The women? A few were St. Bonaventure SID widows. Some came late to the game. It’s the family reunion that no one dreads going to because if you offend someone, it’s not like your mother or father is going to give you a guilt trip over it.

Why does this rambling treatise belong on a food blog? Because we eat too much. Well, that’s not entirely true. We eat far less than we did during our younger days when potato chips, Heluva Good dip, Cherry Coke and Yuengling were the staples. The quantities have stepped back, but the quality has gotten better. There are still the gluttonous walks of shame to Captain George’s Seafood Buffet and Trough, where we eat crab legs until we sweat seafood broth. But there are less burgers and dogs and more things like citrus-ginger chicken and whiskey-marinated London broil. Sure, we have fries and tater tots, but edamame make regular appearances at the table.

So, I look fondly at walking out of here in 29 days and I’ll likely be posting from the trip if we do something of culinary note. Until then, I’ll be on my couch monitoring gas prices at Wawa‘s on Route 13 in Delaware and Maryland and determining the precise moment we should leave to miss traffic on I-95 in Wilmington.