Don Manfredi over at SommBeer.com had a neat little post called “The Beers that Shaped Me,” where he traced his Midwest upbringing through the beers that he was exposed to. I thought it was a neat thing to do, so I’m borrowing Don’s idea. Thanks paesan!

I’m a food and beer writer, by name but not by trade. It might be tough to believe but all of the colorful ads decorating this page do not bring in a lot of income; probably just enough to cover my hosting expenses. My (paying) day job has me writing about much weightier topics — Alzheimer’s disease, aging, state and federal legislation, for instance — than my evening meal or legal adult beverage. But, the food and beer stuff is how I have fun because I get to write about things that I enjoy and have surrounded my life (for good or bad). This is how I trace my path from a stubby bottle of Molson to $9.99 30-packs in college to $20 bombers of Allagash Curieux.

THERE WAS ALWAYS BEER AT MY HOUSE GROWING UP because there was always some sort of gathering at my house. The families would descend for holidays and birthdays. The neighbors of O’Donnell Street rotated porches and driveways each evening after dinner for neighborly banter. The Kennedy Park Bunco League might make its appearance at our house, or Mr. Murray from across the street might drop by for one of his into-the-late-late-night philosophical chats. Or, hell, my father may have just mowed the lawn and wanted a beer.

The Father was a discharged Army reservist that spent quite a bit of time at Fort Drum. He was primarily a liquor consumer: scotch, Jack Daniels, and (in the summer) vodka constructed his rotation. But, when there was beer, it was Molson. His days at the Northern New York army base put him a matter of minutes from the Canadian border and Molson beers were the grand prize. He would always scrounge to get his hands on bottles of Molson Brador, but the beer I remember best is Molson Golden because it was the first beer I ever tasted. I specifically remember the squatty 16 oz. bottle at right. Before green bottles and paper labels, Molson Golden was in an amber bottle with a screened on label that left the ice in the cooler covered in metallic flecks. Golden was the “fancy” beer. It was imported. It was golden. It was…exotic.

(You want to talk about the power of brands and their influence on children? I remember that Mr. Murray from across the street and the Murphys from the next block over always drank Molson Golden. Mr. Olander, one half of the couple that lived diagonally across the street who often landed on the front porch for chain smoking and beverages at night, always had a can or bottle of Schaefer. Our next door neighbor, a hopeless alcoholic that wound up drinking himself to death, would always come home from work with a 12-pack of Old Milwaukee and a carton of Camels. That was 30 years ago.)

The Golden gave up space in the refrigerator to Molson Ice in the 1990s. This was during the ice beer phenomenon that ruined beer for a decade. By reducing the temperature of the beer, breweries could separate more water from the finished product. The result was a more concentrated beer at a lower price point. Strong, cheap beer. Anyhow, this was the beer that was snuck from the basement fridge or the 4th of July cooler. It was also the beer that we would pay people in front of gas stations to buy for us in high school so we could sit in someone’s basement and play pitch. What can I say? We were high class gentlemen.

Speaking of high class, my father took a rather liberal approach to drinking at my high school graduation party. At one point in the late afternoon, I noticed my little sister and (at age 14) and another person her age stumbling around the party with shit-eating grins and Sprite cans full of Coors Light (they would experience their first colossal of a hangovers the next day). Anyhow, The Father confiscated a lot of car keys and looked away. Once dark fell and he fell asleep, about a half-dozen of us kicked the keg. And then we raided the liquor cabinet.

And then I went to college… 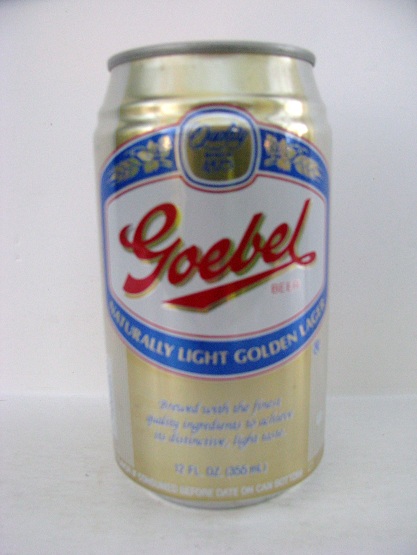 ST. BONAVENTURE UNIVERSITY is a small, very nice Catholic college in Southwestern New York. Picturesque views, rowdy basketball games, and extracurricular activities aside, we did a lot of drinking there.

Milwaukee’s Best was often too nice for some of the house parties we attended. No, the treats waiting for us were kegs of Golden Anniversary. Golden Annie was available from Allegany Beverage for less than $40 per half keg. I’m not sure how they kept the stuff in stock. Anyhow, I assaulted my freshman self with that, $1.99 six packs of Goebel’s (I believe Goebel’s was fire-brewed in Detroit) or 30s of Stroh’s for the everyday low price of $9.99 (and what’s great is that they were made by the same brewery). It was somewhere during this stretch that I walked into the Unimart on Wayne Street with a handful of cash and a confident smile, and walked out with a case of Budweiser cans.

The primary beverages of choice in college were Pepsi and Labatt Blue, though never at the same time. The ubiquitous amber bottle with the blue label, pictured at right, is found at hockey arenas and bars throughout Western and Upstate New York. If the crap from the previous paragraph was the gateway beer, this was what you graduated to. I’m certain that the distributor of Labatt Blue in Olean is one of the largest businesses, by revenue, in Cattaraugus County.

Labatt wasn’t for me. No, I went through a pretty heavy Red Dog phase in college as the rest of the beer-drinking nation went through its own red beer phase. When my father deposited me back on campus for my sophomore year, he left me with a case of it (Responsibility!). Nonetheless, it became my beer of choice during the latter part of my freshman year and the better part of my sophomore year, that is, until my friend Scott got a hold of me. 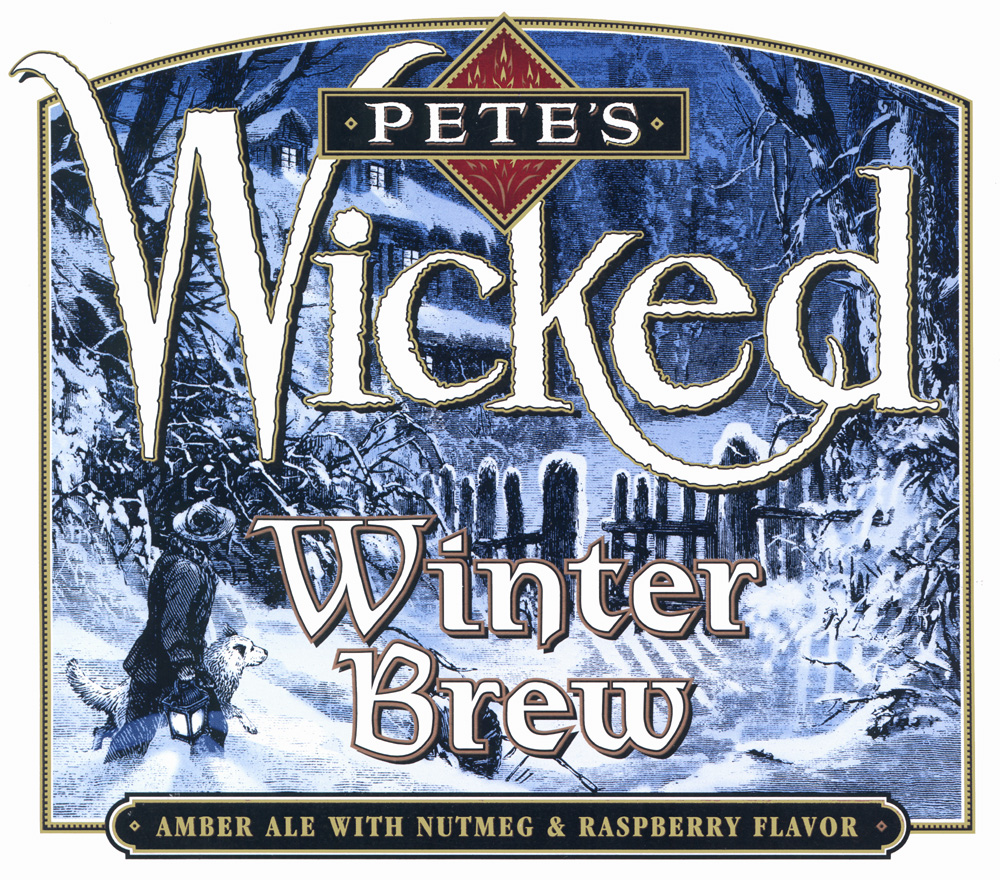 Scott was one of those freaks who was always a year older than anyone else in his class. He was our designated buyer for a while and kept us awash in alcohol until one of our group finally broke the threshold of legal alcohol purchasing. One day, after begging Scott to make a run for us, he told me that he refused to buy me another 12-pack of Red Dog. No, I was going to get a masterclass in fine beer drinking. Scott started me slow — Killian’s Irish Red replaced the Dog, Samuel Adams subbed in for Labatt, and Pete’s Wicked Ale filled in the other spaces (I had a special affinity to Pete’s Wicked Winter, a raspberry- and nutmeg-flavored beer).

Scott graduated, but I was well on my way. Junior year began with my father leaving behind a case of J.W. Dundee’s Honey Brown. By our senior year, The Girlfriend (who is now The Wife) and I discovered hard cider. While it was not widely available at bars, we would regularly and gladly spend $9.99 (an unheard of sum) on a six-pack of Woodchuck Amber or Granny Smith at Tops.

From there, it was over. Samuel Adams was the gateway to discovery. I wonder what Newcastle Brown Ale tastes like? Sierra Nevada? Sure I’ll try it. What’s an IPA? What’s the difference between the Dogfish Head 60- and 90-minute versions of it? I guess there’s only one way to find out, right? Bringing home cases of Yuengling from Pennsylvania (before they expanded and before they stopped caring about their product). Discovering my first microbrewery (as they were once called): Harpoon. There were the first beers from Brewery Ommegang before I understood Belgians, and my attempts to drink my way through the menu at Empire Brewing Company (during its first run).

And now, well, I’m a beer writer by name. And practice. But, it all goes back to those stubby bottles of Molson Golden.

What’s your beer story? What’s your earliest beer memory? Tell me below!