This is a story about grocery shopping.

My friend Phil once gave me a stunned look when I told him that I will shop at two to three different stores for groceries in a given week. It was not unheard of for me to buy meat at Nichols Supermarket in Liverpool, seafood at Price Chopper, and finish my shopping at Wegmans. Nichols has a far superior meat department when compared to other stores in this area, and Price Chopper’s fish selection is vast. Wegmans has everything else. Tops is terrible. Green Hills Farms is just too far away. 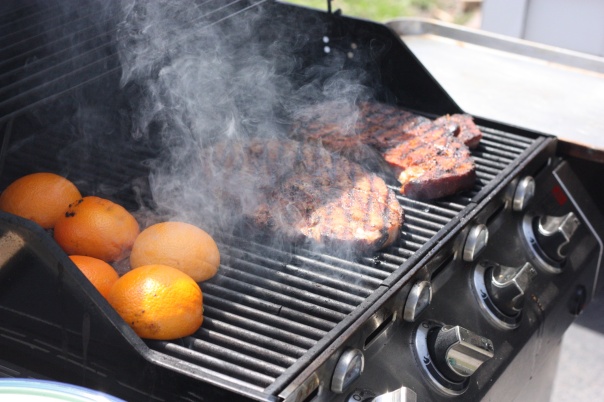 Tell someone at Wegmans or Price Chopper that you want a ham steak, and they will point you at the refrigerated meats case where the ham slices are stocked. Big ham slices are not steaks. A ham steak should, but may not have, a bone. It will definitely have fat. It should be anywhere between 1/2- to 1-inch thick. It’s going to be heavy and somewhat unwieldly, not unlike a porterhouse (or myself for that matter). What it’s definitely going to have is a lot of flavor because that extra fat is going to go a long way to help you maintain a juicy, flavorful piece of meat regardless of preparation method.

Wegmans was out because the ham selection at the Fairmount store was really narrow. Wegmans hams are usually really good, but not for style I was going to use. Naturally, I thought Nichols would have the answer, but their ham selection was well-picked over due to the fact that I was shopping on the day before Easter. Since I was in Liverpool, I went to Mazzye’s Meats, a butcher shop on Route 57 that has been around for about 400 years. They had a cooler full of bone-in and boneless hams, and a bandsaw ready to slice. In 10 minutes and for $23, I had a 5 lb. bone-in ham sliced into 1-inch steaks.

Moral of the story: You want convenience? Go to a grocery store. You want 1-inch ham steaks on the day before a holiday? Go to a butcher. 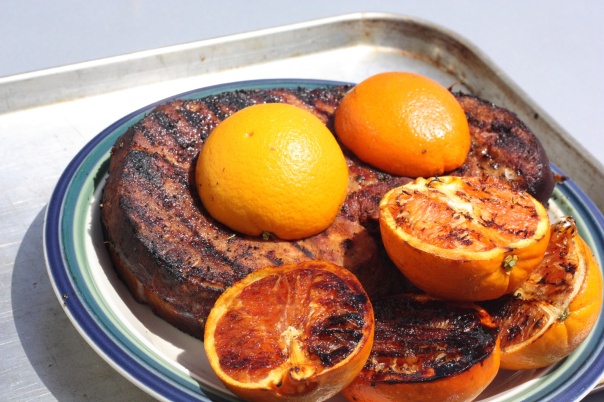 My plan was to use a recipe from Donald Link’s new book Down South. Link is the New Orleans restaurateur behind Peche and Cochon, which you, dear reader, read about earlier this year. His new book focuses on the new school of Southern cooking that he is ushering in from his outposts in The Big Easy. As far as I’m concerned, Donald Link, Jose Andres, Stephan Pyles, Tom Colicchio and Anthony Bourdain reside on a plain of chefs that can do no wrong. If they all got together and made a pot of stewed garbage, I would be first in line and ready for seconds.

This recipe is simple, but requires some very specific ingredients. Blood oranges were, sadly, unavailable for me this weekend but Cara Cara navel oranges were. They are similar, but bloods have more of that bitterness that I was seeking. My only advice is to have a good set of grill tongs because these steaks can fall apart if not handled with care. And that’s no good.

WHAT WORKED: Everything worked together. Everything. The dry rub, the ham, the oranges…everything. Awesome.

WHAT DIDN’T: Wegmans for choosing this weekend to not have blood oranges available.

WHAT DID EVERYONE SAY: The ham got the biggest applause at dinner and everyone was pretty surprised at the flavor combination.

WILL IT MAKE ANOTHER APPEARANCE: Yes, if only because I have another two ham steaks in the freezer.

Clean and oil your grill surface. Preheat the grill to medium (JARED’S NOTE: Ideally, you want a surface temperature of 400 degrees).

Coat each side of the ham steak with oil and dry rub (JARED’S NOTE: I did one side on a plate, flipped the ham over onto the grill and did the reverse side.). Sear each steak until well-charged, about 5 minutes each.

Slide oranges in half. Pour sugar into a small bowl, and dip the cut side of the orange into the sugar to coat. Place the oranges, sugar-side down, on the grill for up to 10 minutes, or until they are well-charred.

Transfer the ham steaks to a platter and rub it with the charred orange halves while squeezing out the juice.