I’m not entirely sure what the point of panini recipes are. Most of these are sandwiches you would eat cold and, sure, who would have thought to combine chicken, figs and arugula? That said, it seems like a simple enough task, right? Right? Yet, there are people who write panini cookbooks and make quite a bit of money for their work.

Take this week’s installment in Panini Sunday. It wasn’t brain surgery and calling it chicken cordon bleu is stretching it. When I was in high school, I worked at a bagel shop/deli where the chicken cordon bleu sub included deep-fried chicken tenders, sliced ham, swiss cheese and Russian dressing (the owner was such a cheap bastard that we made our own Russian: mayo, ketchup and pickle juice). For some reason, the combination of chicken, ham and cheese gets the incorrect title of cordon bleu (which is French for blue cordon).

Now, all of my whining and complaining aside, this was a pretty natural combination that tasted pretty good with some homemade pickles on the side.

In a small bowl, whisk together the herbs and olive oil. Set aside. 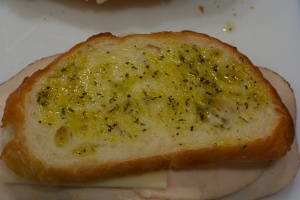