My love affair with chorizo has been well documented here. Though I have made my own in the past, for convenience sake, I would just assume purchase a good quality cured version at the grocery store. For the longest time, that meant trekking down to Syracuse’s Near West Side and shopping at Nojaim Brothers. Nojaim’s is located in a rather ethnic area of town and serves a large Latin-American population.

Recently, the Wegmans in Fairmount has stepped up its charcuterie game (that entire sentence was just as weird to write as it is to read). I’ve noticed that other stores in the chain have robust, standalone sections near the deli with cured salamis, sausages, and other high-salt, high-flavor offerings. In particular, the Wegmans in Nazareth, Pa. has a great section. Slowly, but surely, this section of the Fairmount store’s deli is growing. You can now buy all sorts of sausage at the deli, including Hartmann’s-brand chorizo and andouille. Yes, I know, Hartmann’s doesn’t quite have that authentic Spanish ring to its name, but you learn to make due.

The key here is the pan size. I used a 12-inch pan, so when I added the eggs, they dispersed and didn’t have that thickness that I was looking for. A 10-inch pan, which I own but can’t seem to locate, would allow for the eggs to build taller and form more of a pie shape. Either way, it was pretty good. 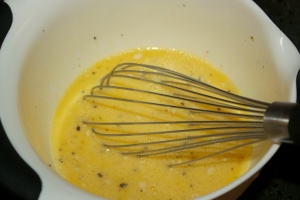 WHAT WORKED: Everything, but I will say this…don’t skimp and used just egg whites. I would rather eat egg whites instead of the whole egg, but you really need the creaminess of the yolk to balance this dish out.

WHAT DIDN’T: My pan, as mentioned previously.

WHAT DID THE WIFE SAY: “This is really good. Wait. Don’t hog all of that,” before slapping my hand away from the serving spoon.

WILL IT MAKE ANOTHER APPEARANCE: Apparently The Wife liked it. A happy wife is a happy house, therefore yes.

In a 10-inch ovenproof anodized aluminum or nonstick skillet, heat 1 Tbs. olive oil over medium heat. Add the chorizo and onions and cook, stirring frequently, until the chorizo is browned and the onions are tender. Let the mixture cool slightly (it can be warm when added to the eggs, but not piping hot). 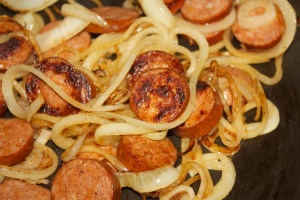 In a bowl, whisk the eggs with the whole milk, flour (don’t worry if the flour forms small lumps), salt, and several grinds of pepper. Combine the chorizo, onions, kale, and pimentón with the egg mixture, folding them in gently.

Wipe out the skillet, add the remaining 2 Tbs. olive oil and return it to medium heat. When the oil is hot, add the egg mixture, spreading everything evenly. Reduce the heat to medium-low, cover, and cook until the eggs are set about 1 inch in from the sides of the pan, 8 to 12 minutes. Uncover the pan and cook on medium until the top  completely set, 10 to 15 minutes more.

Remove the pan from the oven and run a rubber spatula around the sides of the pan to loosen the frittata.

Slip it out of the pan and onto a cutting board. Let the frittata cool for at least 10 minutes before cutting. Serve warm or at room temperature. (NOTE: Good luck with this entire step. I moved it from pan to bowl, and served it.)