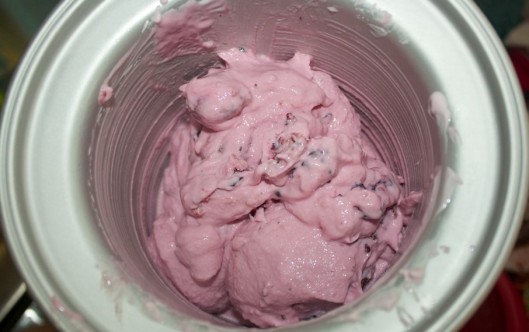 Let’s talk about Christmas for a second. The haul was nice. I restocked the closet at L.L. Bean, added some new Under Armour to the arsenal and got a new iPhone dock/alarm clock. The big news, though, was the addition of two items to the kitchen: a panini press and an ice cream maker.

Cuisinart’s ice cream maker is pretty nifty and simple to use. Freeze the bowl. Mix the cream/sugar blend. Assemble and start the mixer. Add the cream. Mix for 15 to 20 minutes. Add any other stuff. Freeze. I’m simplifying of course, but my first outing — coffee toffee pretzel ice cream — was basically that. I mixed a double shot of espresso from Starbucks with some instant espresso powder, then whisked together in a vanilla ice cream base (heavy cream, sugar, 1% milk). About five minutes before I was done mixing, I tossed in the toffee and pretzels. Done.

The inlaws like frozen yogurt, so I thought something made with Greek yogurt would work for dessert when they came over for dinner last weekend. I had mixed berries in the freezer, so all I needed was a container of plain yogurt to make this happen. I used frozen because, well, it’s January. Berries are not in season. Plus, you will macerate the berries anyhow, so fresh really doesn’t matter here. Being frozen helps keep them from falling apart on the stove.

It was tart, in that way that Greek yogurt can be. There was a grittiness to it as well, which I have noticed in commercially produced frozen Greek yogurt. That said, the inlaws loved the coffee ice cream and mostly ate that. Shows you what I know.

Add berries to a medium saucepan and place over medium-low heat. Top with the lemon juice and stir frequently. Cook about 10 minutes, letting the berries melt and soften some, but not fall apart or go mushy. Remove from heat, strain the liquid from the berries and let them cool.

In the mean time, whisk together the yogurt, milk, vanilla extract and sugar in a medium bowl.

Assemble the ice cream maker as directed by the manufacturer. Slowly add the yogurt mixture to the bowl, then spoon the berries into the bowl. Start the machine and mix until thick, approximately 20 minutes. Transfer to an airtight container and freeze.