Joe Scarborough, the namesake and host of MSNBC‘s Morning Joe program, recently told a story of his prematurely born son. He talked about fear, odds of living, and the baby being wrapped in Saran wrap to keep it warm. He recalls that about 20 minutes after the doctors told him that it was a 50/50 shot of his son living, a nurse came out and said that he would be fine. It seems that the baby had ripped out its tubes and wires, was screaming and fighting with the nurses. She said that he was a fighter and that he’s going to keep on fighting.

I think of this story now when I watch my daughter. I say, “Stop,” and she looks at me, smiles and takes off. Or when I see her try to pick up two snack cups and her steel milk thermos, while already carrying Elmo and Minnie Mouse dolls. Or when she tries to put her socks on without stretching the elastic wide enough. She doesn’t stop. She keeps pushing. No resignation. No reticence. No fear (well, except when a motorcycle passes or lawnmower is running nearby). She keeps fighting. Fighting us. Fighting elastic. Fighting logic and reason. Fighting gravity.

The first official photo of Layla

It was touch and go on the morning of June 11, 2010. Labor started around 11 p.m. the previous evening and resulted in a false alarm (no dilation) visit to the hospital at 2 a.m. Six hours later, The Wife was in intense pain and we were shipped directly to delivery to have all of the requisite monitors and wires attached.

Fetal heart monitors fire an alarm when the baby’s heart spends too much time below 100 beats per minutes. Right around the time that the pain medication was going to be administered, the alarm sounded. The fetal heart rate had dropped to 75 beats. The doctor and charge nurse arrived and poked at The Wife’s stomach, which seemed to straighten things out. About a minute later, the alarm sounded again and 75 was flashing on the little screen. A swarm of nurses came in, shuffling me to a corner of the room. They did some stuff to get the heart rate back to 90.

It was only for a few seconds though. The next dive was at a number below 75 that I never caught. At this point, no one was discussing specifics at a volume that I could hear over the ringing in my ears.

I didn’t think anything about it at the time. The doctor told me that I would be staying in the room, as The Wife was going to receive a general anesthetic. The Wife, on her gurney, was being wheeled out to the “small” operating room across the hall, when I heard someone say that the “big room” was ready. The severity of the situation hit me some time later, but as I was trying not to vomit I only subconciously heard Dr. Kavety say, “We don’t enough time to get there.” (For reference, the “big room” was about 20 feet away.)

So, I sent a couple of text messages to people telling them to get to the hospital.

I began to fear for my wife’s life, going over all the potential possibilities of what would come home:

I tried to stop pondering it but I couldn’t. I thought about what would happen if the dreaded fourth option came to pass. 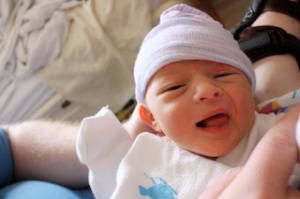 My favorite early photo of Layla

And there I was rolling the same dice. I finished my short, but poignant prayer, and looked up to see a smiling nurse in the room. If there is a fear in my life (besides bridges, tunnels and maggots) it’s that the doctor would tell me that something was wrong. The nurse asked if I heard “that.” I replied that I could only hear the aforementioned ringing in my ears. The nurse walked me into the hall and asked me if I could hear crying. I nodded and was told that the screaming belonged to my baby and that, at 10:51 a.m., she had been pulled out. A few minutes later, the charge nurse (who’s daughter was one The Wife’s students…como se dice “awkward?”) gave me an update and, soon after that, brought the baby in. As I write this, I’m still amazed at this entire process.

I’m not going to lie…it wasn’t love at first sight. I still wasn’t feeling anything. All I knew is that beneath the wad of blankets was a wriggling body that was my daughter. It was a feeling of shellshock that I cannot explain.

The Wife has been at my side for every event of the past 17 years. Whether it was job offers and awards, marriage, bad days at work or death, we’ve been together. For the first time in what seemed like ever, she wasn’t there. I could have said, “You have to see this” or “Can you believe this?” but it would have been to the four walls in the room. Here we were together, The Baby and I, and I had no one to be excited with. Instead, The Baby and I talked. Actually, I rambled. It’s my coping mechanism. I will nervously stream every thought in my head. It soothes me and helps me relate to the situation at hand.

I held The Baby for about the first two hours, as The Wife shook off the anesthesia and received pain medicine. It was not until past Noon that The Baby had a name, and another hour or so after that before anyone but the doctor knew what that name was.

Everyone was alive. Everyone was healthy. And The Baby had a name: Layla Anne (the former for the Eric Clapton/Derek And The Dominoes song, the latter after The Mother-In-Law).

The Baby had fought and won.